Community Satisfaction with Trees and Their Management

Over the last few years we have been exploring which urban tree species may be suited to future climates (Kendal et al., 2018, 2017). This is being strongly influenced by urban heat, and increasingly by climate change. Tree managers were thinking about using trees to adapt cities to climate change; we now understand that urban heat and climate change are having effects on urban trees themselves. This work is showing that species are likely to change in future climates – cities like Melbourne will have a climate more suited to native species and subtropical flowering species (Kendal and Baumann, 2016). In contrast, the Northern European broadleaf deciduous species that have been quite characteristic of cities like Melbourne are most at risk from increasing temperatures.

We are now starting to think more about what the effects of these changes to the urban forest might have on people. Some of these changes are likely to change the way the urban forest looks and functions. In south-eastern Australia, perhaps less broad dense green canopies and winter deciduous trees, and more narrow-leaved and flowering species. If we only choose species that are climate-ready, we could have a dramatic shift in appearance and function, through the use of drought and heat tolerant species. We must include other considerations – community perceptions, health and wellbeing and ecosystem service benefits in future species’ selections. We must also consider effects on biodiversity – and biodiversity is important to people. How do we continue to use indigenous trees in future climates, and how will changing species affect wildlife (Berthon et al., 2021)?

Evolutionary responses often draw on the ‘biophilia hypothesis’ – which suggests that Homo sapiens have a genetic predisposition to prefer landscapes that facilitate survival as a species. Some studies show that people prefer the ‘savanna’ type landscapes found in Africa where humans evolved, and scattered trees in grasslands allowed prospect (the ability to see lions bounding across the plains towards you) and refuge (a place to escape those bounding lions). It has been argued that this helps explain our preference for trees in turf, common in so many of our parks. In my PhD, I explored people’s preferences for green leaves and large flowers in garden shrubs as a sign of high nutrient and water availability, and therefore indicators of a good place to live (Kendal et al., 2012). My PhD supervisor, Kathryn Williams, has studied preferences for street trees and ecological landscapes and founds that indicators of adaptation to arid environments, such as narrow leaves, are not preferred (Williams, 2002; Williams and Cary, 2002). However, the evolutionary cause of these findings is impossible to confirm, and findings may be explained in other ways. Other theories such as people not liking ‘messy’ indigenous landscapes (Nassauer, 1995) or that preferences are shaped by the information available in landscapes (Kaplan, 1985) also tend to assume that all people think the same way.

In contrast, cultural explanations assume that people think differently about trees and landscapes, based on things they learn rather than the genes they inherit. Studies using this approach show that different groups of people share preferences within groups, but preferences vary between groups. For example, a study of preferences for urban trees in residential areas found that UK residents preferred smaller trees than US residents (Schroeder et al., 2006). Paul Gobster has argued that people can learn to see forest landscapes using an ecological rather than a scenic aesthetic, and this results in a very different appreciation of trees (Gobster, 1999). My PhD research also found that some people had learned to love native and Mediterranean garden plants that had neither large flowers nor green leaves. Similarly, individual differences can result from personal experiences, memories and familiarity. Anyone who has worked in any kind of community engagement process, or answered the phone to hear the public’s opinions about trees, will understand that there are many different views out there in the community that are clearly not genetically determined nor the outcome of cultural learning.

Besides preferences, we have been exploring social values (why things are important to people), beliefs (what people accept to be true) and attitudes such as satisfaction and acceptability of management alternatives across a range of environmental contexts including urban forests, gardens and conservation reserves. This work shows that these landscapes are important to people for a wide range of reasons including nature protection, aesthetics, cultural significance and the provision of ecosystem services (Egerer et al., 2019; Kendal et al., 2012; Ordóñez et al., 2017). This again highlights that people think in diverse ways about the urban forest.

In our new project with Camilo Ordóñez (University of Melbourne and University of Toronto), Melanie Davern (RMIT)and others, and partners the City of Melbourne, City of Ballarat and Moreland City Council, we have explored community values and beliefs, and satisfaction with trees and their management, using a survey instrument based on previous work we have conducted, and other studies in the international literature (Jones et al., 2013; Kendal et al., 2015). We surveyed over 2000 residents of LGAs in Melbourne and regional Victoria as well as Tasmania and Brisbane.

We found four categories of social values that explain why trees were important to people (Fig 1.) – natural attributes, social benefits such as relaxation and ecosystem services, their contribution to city identity and cultural heritage were all important to most people. Perhaps surprisingly, there was little variation across LGAs. 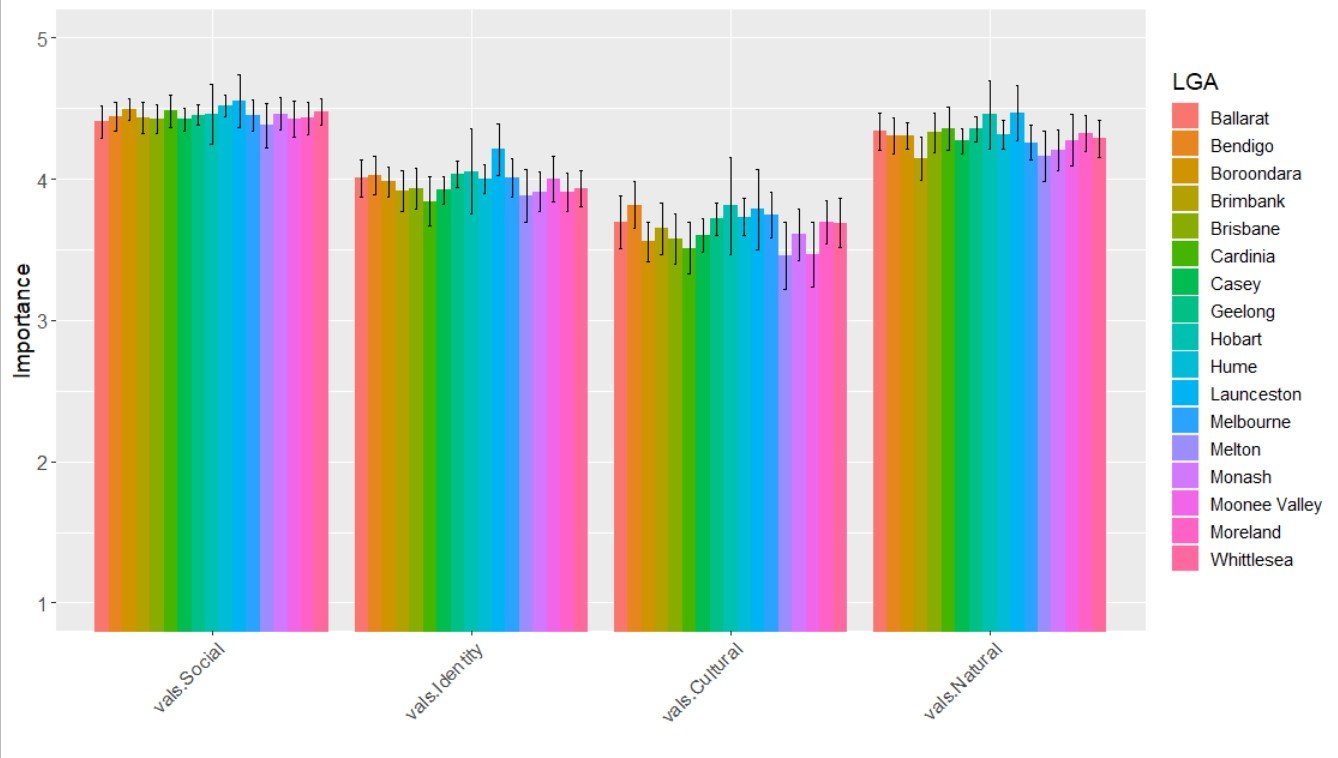 Fig. 1 – Values for trees using the Values Attributes of Landscape (VALS) scale by LGA. The scale of importance is from 1 (not important at all) to 5 (very important) with 3 neutral. 95% confidence intervals are shown. Fig 2 – Beliefs about trees by respondent year of birth. The scale of agreement is from 1 (don’t agree at all) to 5 (agree very much) with 3 neutral. 95% confidence intervals are shown.

Fig 3 – Satisfaction with trees and their management, by LGA tree canopy cover. The scale of satisfaction is from 1 (not satisfied at all) to 5 (very satisfied) with 3 neutral. Fig 4 – A summary of relationships between concepts in the survey showing two pathways to satisfaction. The weight of line reflects the strength of the relationship,

I started to write that this is a story that shows it really doesn’t matter what we do about tree canopy cover or urban forest quality to change community satisfaction with trees and their management. But clearly that is not true. All the great work being done by nurseries, arborists and tree managers and planners is making a real difference to our cities.

Kaplan, R., 1985. The analysis of perception via preference: A strategy for studying how the environment is experienced. Landsc. Plan. 12, 161–176.