Preliminary Investigations into the Effectiveness of Chainsaw-Carved Hollows

The ongoing loss, modification and fragmentation of natural habitats, and particularly mature hollow-bearing trees, presents a major threat to many species of cavity-dependent wildlife worldwide (Fischer and Lindenmayer 2007). Long-term management strategies to increase hollow availability are required to complement the revegetation and restoration of degraded areas, in conjunction with retaining the mature hollow-bearing trees that persist in human-disturbed landscapes (Lindenmayer et al. 2011)

One popular management action used to provide supplementary hollows for cavity-dependent fauna is the addition of nest boxes (Lindenmayer et al. 2017). Nest boxes can be effective in well-resourced programs, typically when a single species of conservation concern is targeted. For example, in Australia, nest box programs have generated positive conservation outcomes for the Gouldian finch Erythrura gouldiae (Brazill-Boast et al. 2013), squirrel glider Petaurus norfolcensis (Goldingay et al. 2015), and Leadbeater’s possum Gymnobelideus leadbeateri (Harley 2016). However, more often nest boxes are used by only a few common species, and are generally less effective for the conservation of rare or threatened species (Lindenmayer et al. 2017). Hence, there is a real risk that limited conservation resources are being spent on the installation of artificial hollows that are ineffective for native species of conservation concern, or are providing resources for highly competitive invasive species, such as European honey bees Apis mellifera, and common mynas Acridotheres tristis (Grarock et al. 2012).

To improve their value for conserving hollow-dependent fauna, we need a clearer understanding of how the range of factors relating to nest box design and placement, which interact to drive temporal patterns in microclimate, affects their suitability to a range of taxa (Rowland et al. 2017). However, supplementary habitats may ultimately be more effective at mimicking the structural and thermal properties of tree hollows if they are mechanically carved directly into the trunk or branches (e.g. with a chainsaw), rather than attached to the outside of trees (Saenz et al. 2001).

Naturally occurring tree hollows provide wildlife with protection from adverse weather conditions. Ideally, artificial hollows should provide the same (or better) protection, yet the thermal suitability of nest boxes for many wildlife species is unclear (Rowland et al. 2017). The few studies to date on this topic have shown that tree hollows and nest boxes vary significantly in their physical and thermal properties, with greater thermal fluctuations occurring in nest boxes compared to natural hollows (Maziarz et al. 2017). Consequently, nest boxes may provide thermal habitats that are unsuitable for target fauna (Rowland et al. 2017).

A recent survey conducted by the Department of Environment, Land, Water and Planning, Victoria, which attempted to quantify the number and location of nest boxes across the state of Vitoria, provides a good example of why thermal properties of nest boxes should be considered. Stakeholders from 94 different nest box programs provided data showing that approximately 10,000 boxes are currently installed across Victoria (Macack 2018). Many of these nest box programs are located in Mediterranean or semi-arid environments. These landscapes are characterised by relatively cold winter and hot summer conditions.

The combination of day-time ambient temperatures above 40°C and high levels of solar radiation, both of which can occur regularly in these environments during summer, can drive internal nest box temperatures well above critical thermal tolerance limits for endothermic birds and mammals using boxes (Rowland et al., 2017). However, these predominantly community-run nest box programs typically do not consider the thermal properties of the boxes they install, and these groups do not have the capacity to monitor internal box microclimates to determine their thermal suitability for the different species that use the boxes.

Across the range of ambient conditions experienced during the study, mean hourly temperatures within nest boxes varied considerably more than natural hollows, chainsaw hollows or log hollows, with boxes experiencing both the hottest and the coldest extremes (Fig. 1). 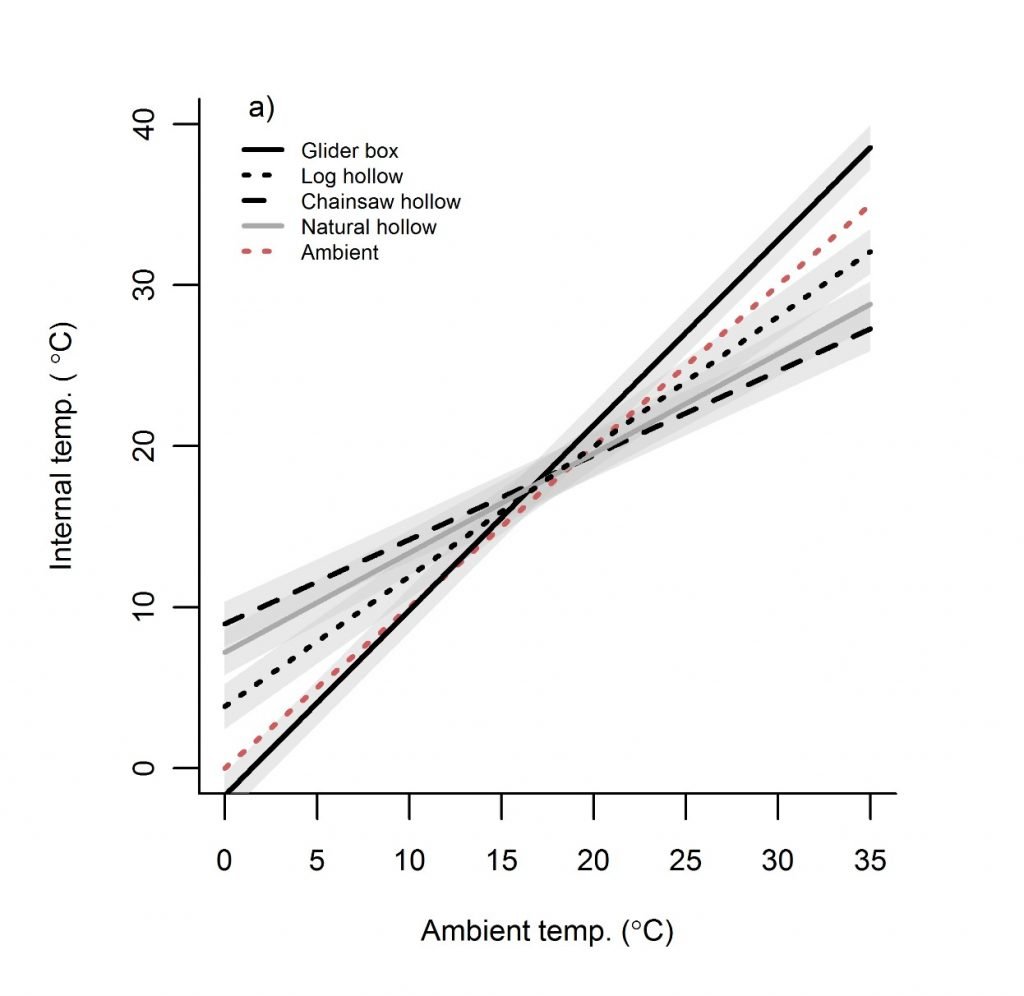 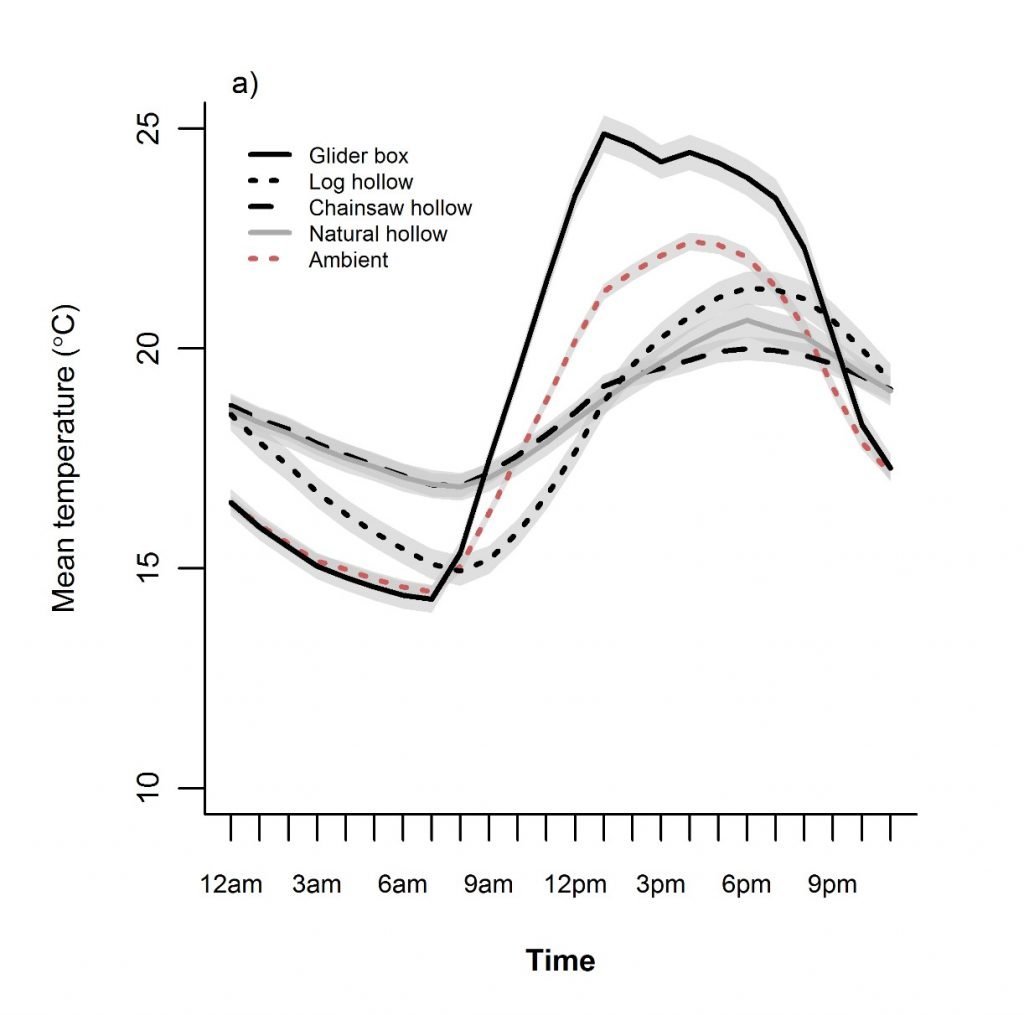 The contrast in 24-h patterns of heating and cooling (relative to ambient conditions) that we recorded in nest boxes compared to natural hollows, chainsaw hollows and log hollows, raises the question – are temperature profiles a factor contributing to the dominant use of nest boxes by common, highly adaptable species? There is some evidence that the ability to tolerate a wide variety of climatic conditions helps exotic cavity-nesting bird species, such as rose-ringed parakeets Psittacula krameri in South Africa, to successfully invade novel environments (Thabethe et al. 2013). However, it is unclear whether this thermal flexibility specifically relates to invasive bird species, or applies more widely.

The link between the thermal profiles in nest boxes and their disproportionate level of use by widespread, highly adaptable species of birds and mammals, particularly in human-disturbed landscapes, warrants further investigation.

In summary, our results revealed that chainsaw hollows had thermal profiles that were similar to natural tree hollows, being consistently warmer than ambient conditions at night, while remaining cooler than ambient during the day. This daily pattern of heating and cooling could provide ecophysiological benefits to nocturnal mammals using cool chainsaw hollows (relative to external ambient conditions) during the day by decreasing the amount of heat loss required (via evapotranspiration) to maintain constant body temperature (Griffiths et al. 2017b; Rowland et al. 2017). It could also benefit diurnal hollow-nesting birds using warm (compared to ambient) chainsaw hollows at night by decreasing the amount of metabolic heat production required to maintain core body temperature (Ardia et al. 2006). In contrast, nest boxes had the opposite pattern of heating and cooling, being slightly colder than ambient at night and substantially hotter during the day. These findings provide the first empirical evidence that chainsaw hollows designed for target species could be used to deliver supplementary habitats with thermal conditions that closely mimic those in natural tree hollows, thereby addressing a significant shortcoming of timber or plywood nest boxes (Rowland et al. 2017; Maziarz et al. 2017).

Growing awareness among policymakers, land managers and conservation professionals of potential limitations associated with nest boxes when used to offset the loss of hollow-bearing trees has lead to increased interest in the potential for novel designs of supplementary habitats (Le Roux et al. 2016). One such technique involves using chainsaws to carve out artificial hollows from the trunks and branches of live trees (Carey and Gill 1983), thereby avoiding the long time periods it takes for these keystone habitat features to form via natural processes (Gibbons et al. 2000). The creation of artificial tree hollows with the use of a chainsaw and wooden box inserts has proved to be effective in North America for providing supplementary nesting habitats for the endangered Red-cockaded woodpecker Leuconotopicus borealis (Cox and McCormick 2016). However, in Australia mechanical creation of cavities in trees is a relatively novel, unexplored technique, with the few studies conducted to date focusing primarily on documenting preliminary evidence of use of chainsaw hollows by wildlife (Hurley and Stark 2015; Lumsden et al. 2016; Rueegger 2017). Less attention has been paid to investigating whether the installation of these artificial hollows elicits changes in the behaviour of hollow-dependent birds and mammals.

Here, we investigated the behavioural response of hollow-dependent wildlife to the creation of chainsaw hollows in the trunks of live, developing trees located in urban and peri-urban parks and reserves across Greater Melbourne, Victoria. We created chainsaw hollows that were designed for small marsupial gliders (e.g. Petaurus spp.) or small hollow-nesting birds (e.g. musk lorikeet Glossopsitta concinna). However, minor variations to the entrance size and internal dimensions could make these supplementary habitats suitable for a range of other hollow-dependent arboreal mammals, tree-roosting insectivorous bats and secondary cavity-nesting passerines.

Our preliminary findings suggest that chainsaw hollows designed to replicate the external physical characteristics of natural hollows could be effective in attracting target fauna to developing trees in regenerating and revegetated landscapes (Semmens et al., 2019). However, to empirically test the effectiveness of different habitat supplementation techniques in attracting target endemic species, further empirical studies are required that compare the use of natural and artificial hollows installed in a range of human-disturbed landscapes (Griffiths et al. 2018). Of particular interest would be studies comparing temporal patterns in wildlife use of natural tree hollows, nest boxes and chainsaw hollows, and testing whether occupancy of these different habitat structures, both natural and artificial, results in variation in the fitness of hollow-dependent birds and mammals.

In this study, we monitored chainsaw-carved hollows installed in live trees that were designed for sugar gliders Petaurus breviceps throughout urban and peri-urban Melbourne. We investigated spatial (hollow, tree and landscape) and temporal influences on the frequency of chainsaw hollow visitation, and the probability of chainsaw hollow occupancy by sugar gliders (Best et al., 2019).

During a 3-year survey period, 14 native hollow-using species were found to visit or occupy chainsaw hollows, including three species not previously recorded in prior chainsaw hollow studies: spotted pardalote Pardalotus punctatus, striated pardalote Pardalotus striatus and agile antechinus Antechinus agilis. Chainsaw hollows were occupied predominately by the target species, the sugar glider; however, they were also used intermittently by microbats and agile antechinus. Over 66% of chainsaw hollows were occupied at least once by sugar gliders throughout the survey period. This figure is high compared to many similar studies investigating occupancy rates of nest boxes by arboreal mammals.

Sugar glider visitations to chainsaw hollows was largely driven by the local density of a critical food resource, black wattle Acacia mearnsii. Occupancy of chainsaw hollows by gliders was also driven by the internal volume of the cavity, and structural complexity of the surrounding habitat, increasing with the density of black wattle, trees and hollow-bearing hollows.

We also recorded preliminary evidence suggesting that parrots may act to keep chainsaw hollows functionally available to other species by chewing at hollow entrances, thus preventing trees from totally closing entrances through the development of wound-wood.

The primary objective underlying biodiversity offset and habitat restoration programs targeting cavity-dependent wildlife is to replace natural tree hollows that have been removed from the landscape with equivalent artificial habitats (Miller et al. 2015). There is a growing body of evidence that traditional timber or plywood nest boxes do not provide equivalent structural or thermal microhabitats to those of natural tree hollows (Maziarz et al. 2017). Consequently, there is unlikely to be any scenario where timber or plywood nest boxes can adequately compensate for the loss of tree hollows for the community of wildlife that rely on these keystone structures (Griffiths et al. 2017a). There is a clear need for collaboration between policy makers, conservation practitioners, the arboriculture industry, and managers of biodiversity offset programs, to develop and implement protocols that incorporate the safe mechanical creation of artificial hollows as permanent structures within trees (Griffiths et al. 2018).

While research into the effectiveness of chainsaw hollows carved into live trees has generated some promising preliminary findings, it is very much early days and there are still many unanswered questions. Where novel methods of habitat supplementation are being used, such as carving chainsaw hollows into trees or re-attaching salvaged log hollows, it is critical that stakeholders endeavor to undertake some level of ongoing, systematic monitoring to document temporal patterns in wildlife use, plus the ongoing costs associated with maintenance and repair of these artificial hollows.