WILDFIRE, TREE MANAGEMENT AND THE ARBORIST – 1 Wildfire and Urban Trees

Wildfires, called bushfires in Australia, have been a common occurrence in many parts of Australia over the past 150-200 years. The ‘Black Saturday’ fires in the State of Victoria in February 2009 destroyed over two thousand homes and were responsible for 173 deaths. These fires, like those of ‘Ash Wednesday’ in Victoria and South Australia in 1983, and more recently in Sydney, South Australia, Western Australia and Canberra, conjure images of destruction, damage and death and are seen as devastating and catastrophic to the natural environment, human life and property.  They are reminders that southern Australia has a long history of major fires that regularly punctuate the past 150 or more years, and the fossil record indicates an even longer record of major and frequent fires (Gill and Groves 1981). Parts of southern Australia are among the most fire prone places on earth – only parts of Mediterranean Europe, and the southern parts of the USA are rivals for the frequency, extent and intensity of their fires.

Wildfires are not destructive in the natural environment as they are part of the normal ecological cycle to which native plants and animals have adapted (Gill and Groves 1981). There are individual plants and animals that die during a fire, but populations and communities continue. However, fire is destructive and threatening to human life when it affects farms, rural townships and more recently the peri-urban and urban outskirts of major cities. The occurrence of urban and peri-urban fires that affect vegetation in gardens, parks and along streets and highways is a more recent phenomenon that has involved an increasing number of arborists.

At a time of climate change, when the weather patterns in many parts of the world, including Australia (in terms of rainfall, higher temperatures, higher wind speeds and altered wind directions), have changed (Moore 2009a), the risks of more intense wildfire, more days prone to fire and fires occurring in urban areas that were once thought to be fire safe have all increased. The Black Saturday fires were reported to be the worst ever and the popular media reported that all plants and wildlife had been killed and that there would be little, if any, natural recovery. Even the soil was said to have been destroyed.

THE FIRE, ECOLOGY AND SPECIES INTERACTION

There are a number of components to understanding the effects of fire on plants. These include the intensity of the fire (often measured as temperature), the duration of the fire and the frequency of how often fires occur. It is essential to understand what fire does to trees and to recognise that not all trees are affected in the same way by fire. Some trees are burnt where there is a high temperature, irreversible oxidation of plant materials. If the intensity and duration of the burning are high enough, then the plant part or plant as a whole may be killed.  Other trees are singed, which is essentially superficial burning and parts of the plant or the whole plant have prospects of recovery. Finally, trees may also be scorched by the blasts of hot air from the strong winds associated with wildfires (Figure 1).

The effects on plants of burning, singeing and scorching are quite different, and plants respond variously to the effects of fire depending on the adaptations they possess to fire and stress in general. Adaptations may be structural, physiological or ecological and some of the adaptations of eucalypts to fire (Table 1) serve as fine examples of the typical adaptations of components of the Australian flora more generally to fire (Gill and Groves 1981). The possession of some, or all, of these adaptations may also be used as an indicator of likely species survival of fire. Consequently different species must be managed in different ways after fire. 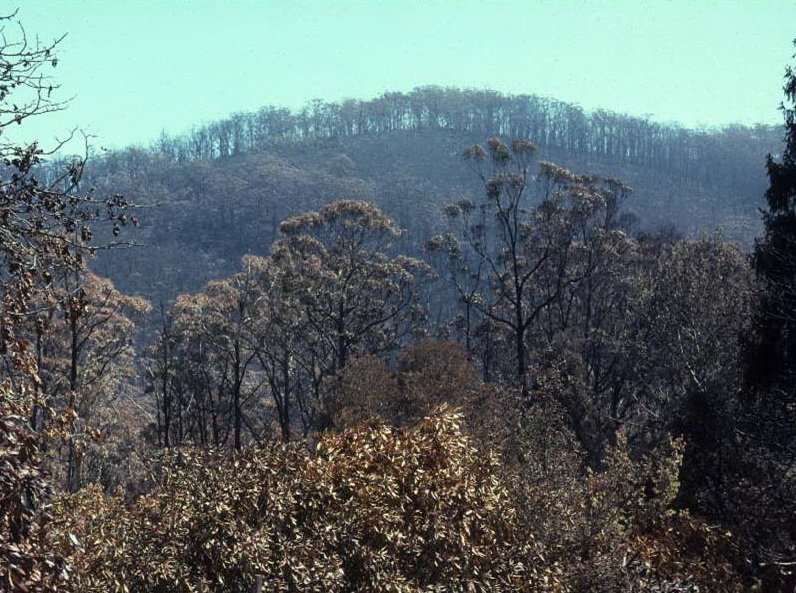 Figure 1. The aftermath of a wildfire, but the trees and plants, including the rhododendron in the centre foreground,
have not been burnt, but scorched by the blast of hot air that accompanies such fires.

Table 1. Some common adaptations of eucalypt species to fire that can affect
their survival and recovery from bushfire (modified from Moore 1995)

From an ecological perspective, fire removes competition and allows high levels of light to reach the forest floor. After fires many, and often large, mushrooms and “toadstools” appear which are often the fruiting structures of the mycorrhizal fungi associated with tree, shrub and grass roots. Usually soils are not killed by fire but are enriched with nutrients. Signs of recovery are often in evidence 10 days after fire if there has been rain. Many people are up-lifted, given hope and impressed with the speed of recovery.

In forests dominated by thin, smooth-barked tree species, such as the mountain ash (Eucalyptus regnans) forests in southern parts of Australia, the effects of fire are swift, sure and predictable. Individual trees are very sensitive to fire and almost all that are burnt are killed (Moore 1995). However, within weeks of the fire, the fruits and foliage on the trees at the time of the fire are shed, providing both a nurturing mulch (or ash bed) and a rich seed source for the regeneration that follows.

In other forest types, such as mixed eucalypt forests of messmate (E obliqua) and peppermint (E radiata and E dives), regeneration occurs not only from seed, but many individual trees survive the fire, and epicormic shoots and lignotuberous shoots emerge as the communities commence a new cycle of growth within months (Figure 2). Lignotubers, probably better known as basal burls in the northern hemisphere, are found in many Australian tree species and provide a rapid and sound replacement of a tree from the shoots that develop and which utilize a large and well-established root system. 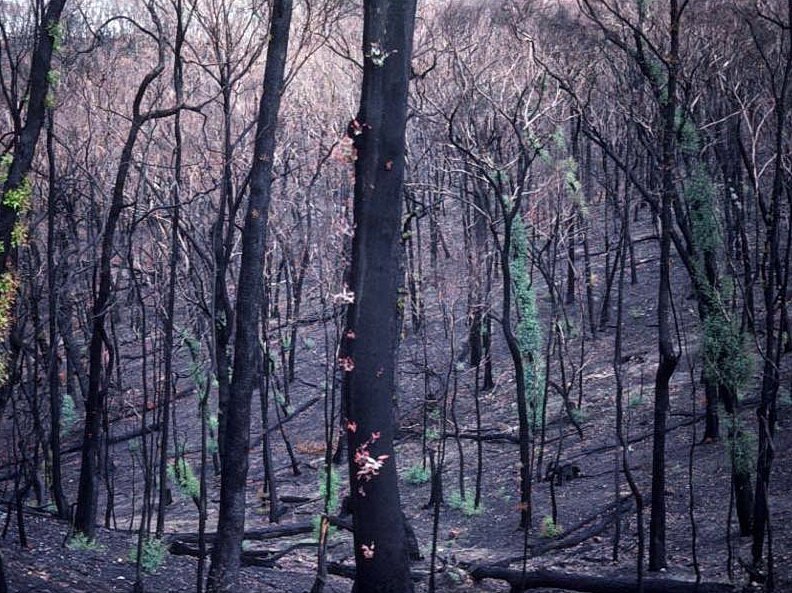 Epicormic buds are dormant buds that are found just under the bark of many eucalypts and other tree species, and like the dormant buds found in oaks and elms amongst many other species, provide for a very rapid canopy replacement. Initially however, they are weakly attached and many subsequently die or fall from the tree and so their early appearance is not necessarily a sign of long term survival (Figure 3).

If epicormic shoots develop low down on the trunk they can become a dangerous falling hazard due to their rapid increases in weight and length resulting in shedding because of the weak attachment. However, as time goes by during each growing season a new tree grows over the old wood and so a proper and strong branch attachment can be developed (Moore 2009c). Often arboricultural intervention to reduce the length and weight of epicormic shoots may be required to ensure that a sound branching structure develops on a fire affected tree.

In the past after wildfires, bulldozers often piled tree ferns into great heaps on the assumption that they were fire sensitive and had been killed. In fact, the opposite is the case and the growth habit of the rough tree fern (Cyathea australis), to a lesser extent the smooth tree fern (Dicksonia antarctica) and many of the ground fern species (Polystichum sp., Blechnum sp.) is such that they are unlikely to burn and as a consequence are fire resistant. The fibrous leaf bases hold a great deal of moisture and are slow to burn (Moore 1995). These characteristics provide protection for the growing apices and so ferns suffer little damage. They have been defoliated, but soon produce new fronds and show a full recovery. 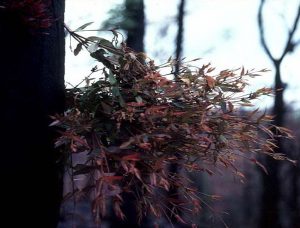 Many of the mountain communities and peri-urban landscapes burnt in fires were renowned for their northern hemisphere conifer collections. It is often assumed that conifers are fire sensitive and as a consequence many trees are felled in the days immediately after fires. While most pine and cypress species are sensitive, not all conifers are killed by fires, and some are renowned for their longevity and fire resistance. The thick bark of the redwoods renders them fire resistant, and some of the deciduous conifers also cope well with fire. Often trees are removed after fire unnecessarily, causing major impacts to the landscapes they once dominated.

For other exotic plants, whether they are killed or survive fire depends upon the nature of their injury, their growth habit and adaptations. Many rhododendrons burnt in the fire were killed, but those that were scorched by hot wind blasts, while looking rather sorry suffered little more than defoliation and soon produced new leaves and shoots.

For other tree species, although the stems and foliage were killed in the fires, the root systems remained alive and suckers soon emerged.
Regeneration from the rootstocks is not only useful, but provides a rapid means of re-establishing valuable vegetation. However, caution must be exercised because for grafted specimens, the rootstocks may not only be the wrong variety, but in some cases are different species that are not wanted. This scenario is demonstrated in the recovery of many rose, wattle and olive specimens.

In dealing with environmental and ecological issues, it is a matter of getting the balance right. A focus on one ecological factor to the exclusion of others is usually a recipe for environmental disaster. Poor decisions in reaction to fires could easily lead to a degradation of both natural and created landscapes and a loss of the many ecological services they provide (Moore 2009b). Such an outcome would not only have significant negative economic impacts, but could prove detrimental to human health and well-being. Arborists need to appreciate their role in managing fire-related aspects of urban tree management.

Climate change will see a greater fire risk for much of Australia, with more extreme fire weather days, stronger winds from different directions and higher temperatures. At the same time however, the value of vegetation and trees in particular, especially in urban and peri-urban parts of cities, in reducing urban heat island effects and countering some of the temperature increases associated with climate change will be greater than in the past. Arborists have a significant role in contributing to urban tree management and will need to understand the subtle interactions of fire, ecology and species characteristics in sustainable urban environments. z